FORTNIGHT: BATTLE ROYALE IS TAKING OVER THE WORLD!

WHAT IS FORTNITE: BATTLE ROYALE?

In Fortnite: Battle Royale, you parachute onto an island where 99 other savage players battle it out to the death using an array of weapons and tools.  The goal is to be the last person or team standing at the end of the game. It is a fast-paced, action-packed game, not unlike THE HUNGER GAMES, where strategic thinking is a must in order to survive.  Now that you know the basics, let’s take a look at how Fortnight:Battle Royale is taking over the World.  Here are 9 shocking facts about Fortnite: Battle Royale.

Don’t get confused, when people talk about Fortnite, we can guarantee with 99.9-percent accuracy that they’re actually talking about Fortnite: Battle Royale. “Fortnite” was published by North Carolina-based studio Epic Games and released in “early access” in July 2017 and it cost $59.99 to download. The game is set on modern-day Earth, but most of humanity has disappeared. One of the game’s core mechanics is collecting materials to build protective fortifications. A few months after its initial launch, Epic Games dropped “Fortnite Battle Royale,” a free mode using assets and gameplay elements from the main game in which 100 people square off against each other in a fight for survival — with the last living player crowned the winner. This is when “Fortnite” really started to take off — 10 million people were playing within weeks of its release. The Battle Royale mode is what remains incredibly popular and what most people are talking about when they talk about “Fortnite.”

Believe it or not, Fortnite: Battle Royale is free to download, but players can buy a virtual currency they can exchange during play for skins, more celebratory dances or special weapons. Fortnite made $296 million during the month of April with these microtransactions compared to roughly $250 million for the opening weekend of Avengers: Infinity War. Fortnite: Battle Royale makes billions of dollars every year with over 80-million active users. 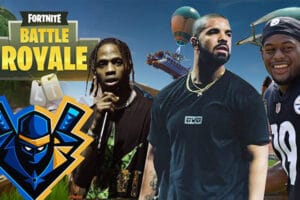 A surprising list of celebrities play Fortnite, and they have nothing to hide about it. From NBA players, like Ben Simmons and Josh Hart, to rappers, like Drake and Chance The Rapper, Fortnite has everyone addicted. With the 2020 NBA season shut down due to the coronavirus pandemic, many players have been showcasing their gaming skills on        Twitch. Obviously, it’s not just rap legends and NBA stars seeking out the best weapons in Fortnite, either. Old and young actors, like Roseanne Barr and Finn Wolfhard, are all jumping on board. Other celeb gamers that are on Fortnite include Joe Jonas, Gordon Hayward, and Richard Sherman.

Drake revealed that Fortnite Battle Royale has become a guilty pleaser and a much-needed breather from the grind of recording his new album. Drake stated that it’s quite normal to spend as much as 20 hours in the studio during a recording day. According to    the rapper, playing Fortnite Battle Royale or watching a streamer like Ninja play the game provides a nice “little mental break.”

4. FORTNITE: BATTLE ROYALE IS THE MOST WATCHED GAME ON TWITCH

Well over 650,000 (at peak times) people tune in to watch Fortnite: Battle Royale streams on Twitch. This makes viewership as large – and in some cases larger than some cable news shows on Discovery, History, CNN, and MSNBC.  On the night of March 14, 2018, popular video game streamer Ninja (real name: Tyler Blevins) was playing Fortnite: Battle Royale for his legion of followers on Twitch. However, the number of people tuned in would grow exponentially once rap superstar Drake joined Ninja’s squad. They were also joined by rapper Travis Scott and Pittsburgh Steelers wide receiver JuJu Smith-Schuster. Over 628,000 people tuned in to watch this fearsome foursome, setting an all-time, non-tournament Twitch viewership record.

6. PARENTS ARE HIRING FORTNITE COACHES FOR THEIR KIDS

The Wall Street Journal recently reported that there’s a growing trend of parents who pay to have their children coached to become better Fortnite: Battle Royale players.  The parents claim that their children feel pressure not only to play Fortnite competitively with their friends but to win. Many parents pay up to $150 an hour for top coaches, and they see this an investment in their child’s future because E-Sports has become big business and YouTubers with channels dedicated to Fortnite, like Preston Playz, can make millions of dollars per month.

7. THE VICTORY DANCE THE “FLOSS” WAS BANNED AT SEVERAL SCHOOLS

A school has banned the dance craze “flossing” from the hit video game Fortnite because the moves are intimidating children on the playground.  Many parents at the school were outraged and took to social media to disparage the teacher that spearheaded the campaign to ban the dance.  One parent went so far as to compare the situation to the movie Footloose and encouraged the students to rebel against the ban. 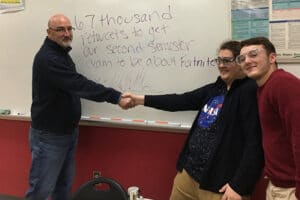 8. FORTNITE WAS ON THE FINAL EXAM

A group of students at Tippecanoe High School recently made a bet with their AP Chemistry teacher: If their Tweeted challenge received 6,700 retweets, the teacher would have to change their final exam to feature exclusively questions related to Fortnite. The tweet was retweeted over 30,000 times, and as a result, Mr. McCray incorporated Fortnite concepts into questions involving ionic bonds and the periodic table.

9. FORTNITE CHEATERS CAN BE SUED AND BANNED

Yes, cheating in Fortnite is an offense that can get you banned for life, and add insult to injury, Epic Games might even follow up with a lawsuit.  In 2017, Epic Games filed a lawsuit against a 14-year-old boy who was caught cheating.  The cases began in 2017 when Epic Games took legal action against individual users who had allegedly used the site Addicted Cheats to obtain “aimbots” that would give them a competitive edge. Epic Games claimed that the modification of the game’s code is against Fortnite’s End User License Agreement and the Copyright Act.

The 14-year-old boy didn’t take the lawsuit seriously as he continued to cheat even after the lawsuit was filed with the court.  The young gamer had Epic Games fuming when he posted videos of him cheating and showing others how to cheat.  He taunted Epic Games with one “How To Cheat” video entitled “You guys can eat my ass once again.” Needless to say, the boy and Epic Games settled the lawsuit out of court.

If you love games, CLICK HERE for 11 Ways to Beat a Claw Machine!

11 Tips for Beating a Claw Machine

Why were chainsaws invented? You won't believe the answer!